YouTube Kids’ latest update is giving parents more control over what their kids watch. Following a change earlier this year that allowed parents to limit viewing options to human-reviewed channels, YouTube today is adding another feature that will give parents the ability to explicitly whitelist every channel or video they want to be available to their children through the app.

Additionally, YouTube Kids is launching an updated experience to serve the needs of a slightly older demographic: tween viewers ages 8 through 12. This mode adds new content, like popular music and gaming videos.

The company had promised in April these changes were in the works, but didn’t note when they’d be going live.

With the manual whitelisting feature, parents can visit the app’s Settings, go to their child’s profile, and toggle on an “Approved Content Only” option. They can then handpick the videos they want their kids to have access to watch through the YouTube Kids app.

Parents can opt to add any video, channel, or collection of channels they like by tapping the “+” button, or they can search for a specific creator or video through this interface.

Once this mode is enabled, kids will no longer be able to search for content on their own.

While this is a lot of manual labor on parents’ part, it does serve the needs of those with very young children who aren’t comfortable with YouTube Kids’ newer “human-reviewed channels” filtering option, as mistakes could still slip through.

A “human-reviewed” channel means that a YouTube moderator has watched several videos on the channel, to determine if the content is generally appropriate and kid-friendly, but it doesn’t mean every single video that is later added to the channel will be human-reviewed.

Instead, future uploads to the channel will only go through YouTube’s algorithmic layers of security, the company has said.

Unfortunately, while there is now a whitelisting option, there’s still no option to blacklist videos or channels to block them from the app.

That’s a problem because there are videos that are perfectly “kid-safe” that parents just want to limit for other reasons. “How to make slime” videos come to mind – something that parents everywhere likely want to block at scale after having their houses destroyed by the goo. (Thanks YouTube. Thanks Katrina Garcia.)

The other new feature now arriving will update YouTube Kids for an older audience who’s beginning to outgrow the preschool-ish look-and-feel of the app, and the way it sometimes pushes content that’s “for babies,” as my 8-year old would put it.

Instead, parents will be able to turn on the “Older” content level setting that opens up YouTube Kids to include less restricted content for kids ages 8 to 12. 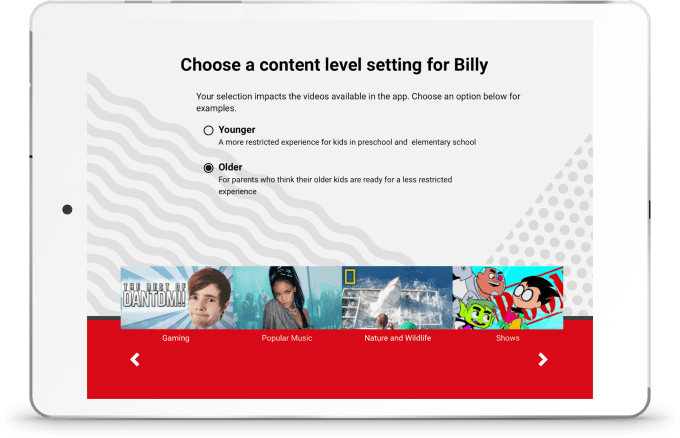 According to the company, this includes music and gaming videos – which is basically something like 90% of kids’ YouTube watching at this age. (Not an official stat. Just what it feels like over here.)

The “Younger” option will continue to feature things like sing-alongs and other age-appropriate educational videos, but YouTube Kids’ “Older” mode will let kids watch different kinds of videos, like music videos, gaming video, shows, nature and wildlife videos, and more.

YouTube stresses to parents that its ability to filter content isn’t perfect – inappropriate content could still slip through. It needs parents to participate by blocking and flagging videos, as that comes up. 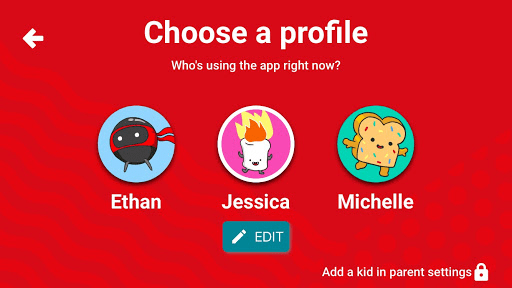 It’s best if kids continue to watch YouTube while in parents’ presence, of course, and without headphones, or on the big screen in the living room where you can moderate kids’ viewing yourself.

But there are times when you need to use YouTube as the babysitter or a distraction so you can get things done. The new whitelisting option could help parents feel more comfortable letting their kids loose on the app.

Meanwhile, older kids will appreciate the expanded freedom. (And you won’t be constantly begged for your own phone where “regular YouTube” is installed, as a result.)

YouTube says the parental controls are rolling today globally on Android and coming soon to iOS. The “Older” option is rolling out now in the U.S. and will expand globally in the future.