This is sure to exacerbate fears that Facebook will further exploit Instagram now that its founders have resigned. Instagram has been spotted prototyping a new privacy setting that would allow it to share your location history with Facebook. That means your exact GPS coordinates collected by Instagram, even when you’re not using the app, would help Facebook to target you with ads and recommend you relevant content. Worryingly, the Location History sharing setting was defaulted to On in the prototype. The geo-tagged data would appear to users in their Facebook Profile’s Activity Log, which include creepy daily maps of the places you been.

This commingling of data could upset users who want to limit Facebook’s surveillance of their lives. With Facebook installing its former VP of News Feed and close friend of Mark Zuckerberg, Adam Mosseri, as the head of Instagram, some critics have worried that Facebook would attempt to squeeze more value out of Instagram. Tat includes driving referral traffic to the main app via spammy notifications, inserting additional ads, or pulling in more data. Facebook was sued for breaking its promise to European regulators that it would not commingle WhatsApp and Facebook data, leading to an $122 million fine.

A Facebook spokesperson tells TechCrunch that “To confirm, we haven’t introduced updates to our location settings. As you know, we often work on ideas that may evolve over time or ultimately not be tested or released. Instagram does not currently store Location History; we’ll keep people updated with any changes to our location settings in the future.” That effectively confirms Location History sharing is something Instagram has prototyped, and that it’s considering launching but hasn’t yet. 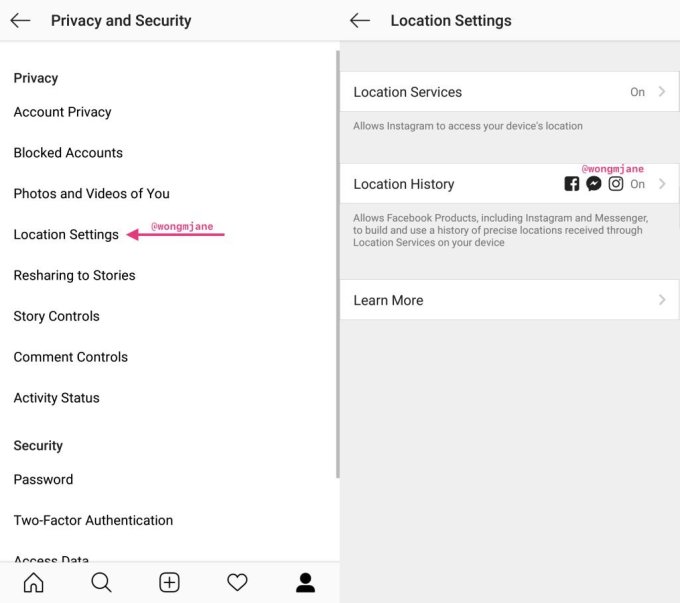 The screenshots come courtesy of mobile researcher and frequent TechCrunch tipster Jane Manchun Wong. Her prior finds like prototypes of Instagram Video Calling and Music Stickers have drawn “no comments” from Instagram but then were officially launched in the following months. That lends credence to the idea that Instagram is serious about Location History.

Located in the Privacy and Security settings, the Location History option “Allows Facebook Products, including Instagram and Messenger, to build and use a history of precise locations received through Location Services on your device.” 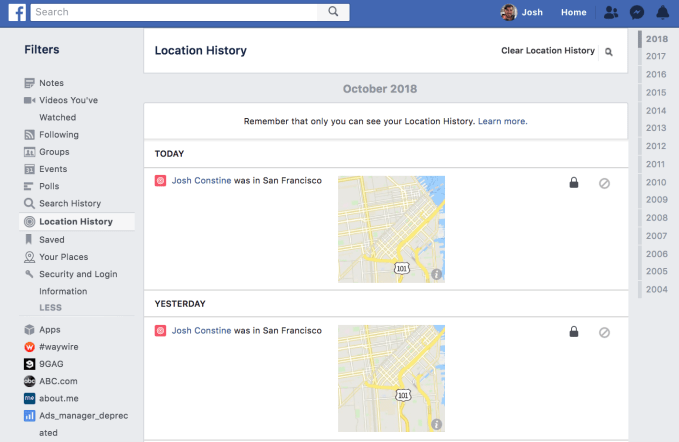 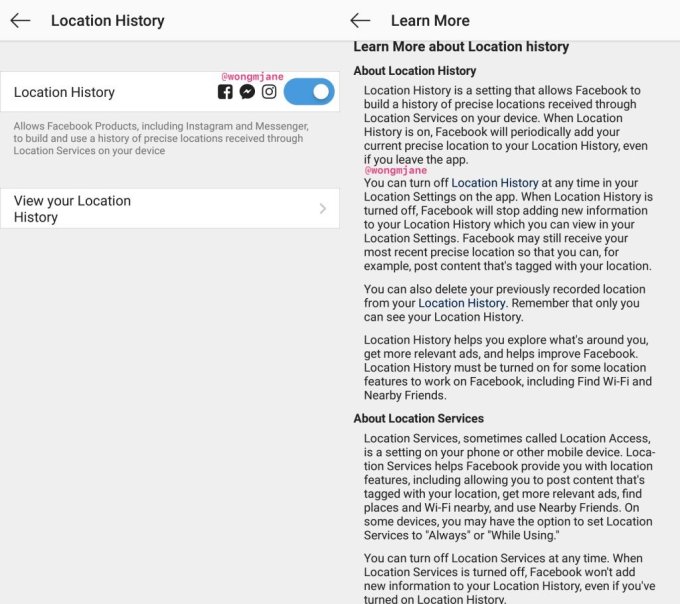 As part of a 2011 settlement with the FTC over privacy violations, Facebook agreed that “Material retroactive changes to the audience that can view the information users have previously shared on Facebook” must now be opt-in. But since Location History is never visible to other users and only deals with data Facebook sees, it’s exempt from that agreement and could be quietly added. Most users might never dig deep enough into their privacy settings to turn the opt-out feature off.

Delivering the exact history of where Instagram users went could assist Facebook with targeting them with local ads across its family of apps. If users are found to visit certain businesses, countries, neighborhoods, or schools, Facebook could use that data to infer which products they might want to buy and promote them. It could even show ads for restaurants or shops close to where users spend their days. Just yesterday, we reported that Facebook was testing a redesign of its Nearby Friends feature that replaces the list view of friends’ locations with a map. Pulling in Location History from Instagram could help keep that map up to date. 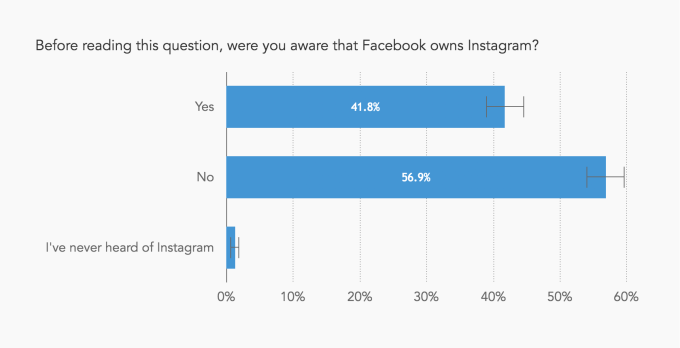 Sources tell TechCrunch that Instagram founders Kevin Systrom and Mike Krieger left the company following increasing tensions with Zuckerberg about dwindling autonomy of their app within the Facebook corporation. Systrom apparently clashed with Zuckerberg over how Instagram was supposed to contribute to Facebook success, especially as younger users began abandoning the older social network for the newer visual media app. Facebook is under pressure to keep up revenue growth despite it running out of News Feed ad inventory and users switching to Stories that advertisers are still acclimating to. Facebook is in heated competition with Google for last-mile local advertising and will take any advantage it can get.

Instagram has served as a life raft for Facebook’s brand this year amidst an onslaught of scandals including fake news, election interference, social media addiction, and most recently, a security breach that gave hackers the access tokens for 50 million users that could have let them take over their accounts. A survey of 1,153 US adults conducted in March 2018 found that 57 percent of them didn’t know Instagram was owned by Facebook. But if Facebook treats Instagram as a source of data and traffic it can strip mine, the negative perceptions associated with the parent could spill over onto the child.