Facebook earned $16.91 billion off all those users with a $2.38 GAAP earnings per share. Those numbers handily beat Wall Street’s expectations of $16.39 billion in revenue and $2.18 GAAP earnings per share, plus 2.32 billion monthly and 1.51 billion daily active users. Facebook’s daily to monthly user ratio, or stickiness, held firm at 66 percent where it’s stayed for years, showing those still on Facebook aren’t using it much less.

Facebook shares had closed today at $150.42 but shot up over 9 percent following the record revenue and profit announcements to hover around $162. A big 30 percent year-over-year boost in average revenue per user in North America fueled those gains. Yet that’s still way down from $186 where it was a year ago and a peak of $217 in July.

CEO Mark Zuckerberg went beyond his usual intro to the earnings report where he assures investors things are going well and highlights new opportunities. This quarter he noted “We’ve fundamentally changed how we run our company to focus on the biggest social issues, and we’re investing more to build new and inspiring ways for people to connect.”

Squeezing Money From The Olds

Facebook managed to grow its DAU in both the critical US & Canada and Europe markets where it earns the most money after stagnation or shrinkage in previous quarters. The fact that Facebook is no longer dwindling it its most lucrative markets is surely contributing to its share price climb. Facebook’s monthly active user plateaued in North America but roared up in Europe. That was shored up by a reversal of last quarter’s decline in Rest Of World average revenue per user, which fell 4.7% in Q3 but bounced back with 16.5 percent growth in Q4. 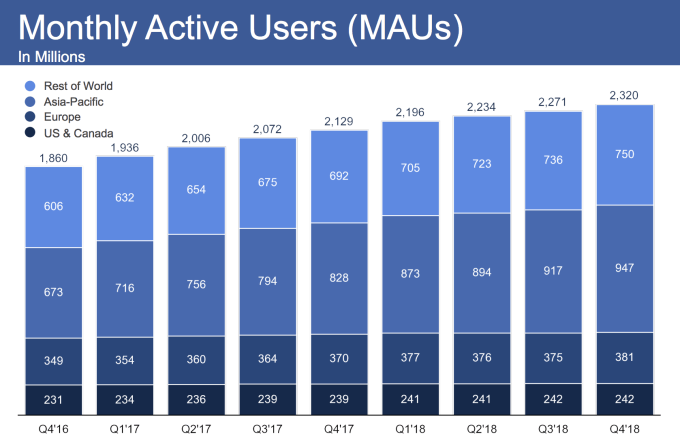 Facebook raked in $6.8 billion in profit this quarter as it slowed down hiring and only grew headcount 5 percent from 33,606 to 35,587. It seems Facebook has gotten to a comfortable place with its security staff-up in the wake of election interference, fake news, and content moderation troubles. Its revenue is up 30 percent year-over-year while profits grew 61 percent, which is pretty remarkable for a 15-year old technology company.

But morale isn’t quite as rosy. It’s been a brutal quarter for Facebook At least its swifter user growth rates show Facebook survived its biggest ever data breach without scaring off too many people. Meanwhile it’s continuously struggled with scandals like hiring opposition research firm Definers, and it saw its new teen app Lasso largely flop. Facebook will have to convince investors it knows how to win back the next generation, or at least keep squeezong a lot more money out of the last one like it did in Q4.