Hello there, friends! I’m Hagop, one of the newest addition to the Android Police team. As we say, I’m part of the “night crew” because I’m based in France and I work hard on delivering news when America is asleep. Of course, I also focus on bringing content to our readers across the world, who get to read my posts fresh out the oven. What I love here is the diverse background our writers and editors have, how we work together, but also how awesome our readers are! In the few weeks I’ve been writing for AP, you taught me so much, and interacting with you has been a genuine pleasure, so thank you for that.

I started writing and reviewing mobile devices in 2006 on a site I founded to share my enthusiasm for technology. I later closed it down and joined sites that gave me the opportunity to focus on content and interacting with readers, who share a common passion and engage in stimulating discussions.

Let’s get to know each other: I’m ethnically Lebanese-Armenian but was born and raised in France. I then lived in the US for a while, went to an American business school, traveled to South Korea for an exchange semester, worked in Singapore for a year, and ended up coming back to Paris in 2014. Given my background, I speak a couple of languages: English (in case you were wondering), French, Armenian, Spanish, Arabic, Korean, and some Turkish; so I’d be happy to discuss in your native tongue.

My love story with mobile phones began when I got my first phone in 2001, a state-of-the-art Nokia 8310, that had the latest innovation for the time, including an IR port and, brace yourself, GPRS — it was the first phone to feature the technology. In the years that followed, smartphones started growing in popularity, and I obviously wanted to be one of the early adopters. I bought a Windows Mobile phone and stayed on that platform for a few years until I started realizing it was too geeky, and other ones offered much simpler interfaces and had a better app ecosystem (remember, we’re talking circa 2005 here). Given my previous experience with Nokia, I decided to give Symbian a try and bought an N95 the day it came out. I was in love with that thing; it had GPS, 3G, and a great camera. I kept it until they released the N97, which was a disaster, and made me look for other options.

I did think of Android, but what I saw looked like a glorified Windows Mobile interface, until I encountered the HTC Desire. That convinced me to give Android a try, so I purchased the HTC Desire HD and fell in love with the OS. I’ve never switched back ever since and upgraded to a Note 2, LG G3 (horrible experience), Galaxy S7, and Galaxy S9 over the years. I completed the collection with a Fossil Q Explorist I got two years ago, but I have to admit I’m not that impressed by WearOS. I also bought an iPad Mini in 2013, but I didn’t like iOS’ closed ecosystem and limitations, and never wanted to buy an iPhone because of that — I mean seriously, how could I possibly give up the Android share menu, APK side loading, and customization?

On the other hand, I’m a Mac user, and I actually like the OS so much that I even ask (or rather, demand) to have a Mac during job interviews — thankfully my work laptops have been Apple computers since 2015. As you might have guessed, I use my MacBook Pro to write my posts and like to isolate myself from noisy environments thanks to my Bose QC35 headphones. As you can tell from the picture, I always work with a baguette on my desk, because, why not? No seriously, I don’t, but I eat a lot, so there’s usually food not too far from me. 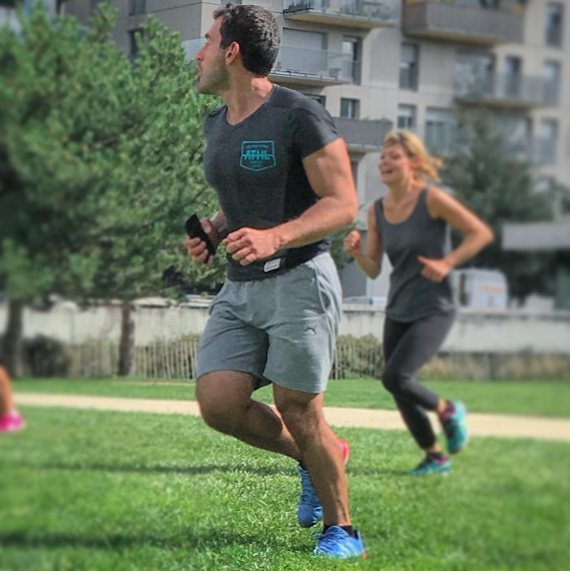 There’s a simple explanation for that: I hit the gym at least four times a week, which makes me feel hungry all the time, but I eat healthier bites than a loaf of bread — my coworkers recognize my desk thanks to the protein bar next to my keyboard! I like to share my passion for fitness with others, so you’ll often see me giving a class to a group of friends in a park, like in the picture above. I’m also really into biking (as in cycling), which is how I get to work, but I also love going on longer (100 to 200 km) rides into the French countryside when the weather is nice. I’m also a world traveler; I love discovering new places, meeting new people, and learning about their culture, especially their food. Finally, I’ve been into commercial aviation ever since I was a kid. I can name a plane by seeing its picture, and I get overly excited when I meet someone who works in the industry!

I’m looking forward to bringing fresh content to you, but most importantly, getting to know you and learning more about innovations, apps, and devices! Feel free to drop me a shout in the comments.