Twitter is rolling out the redesign to its camera feature TechCrunch reported on a month ago that’s designed to let you capture photos, videos, and live footage and connect them to global conversations. Starting today when you swipe left from the Twitter timeline, you’ll get the new camera that’s no longer buried in the tweet composer. After you capture some media (no uploads for now), you can overlay a location, hashtag, or some words on a colored label. But what’s really special is that Twitter will show this media in a larger, more immersive format in the feed with the imagery appearing before the text in your tweet.

Twitter isn’t launching Stories or some dedicated feed of photos to rival Instagram. But it wants to become a more real-time lens on the world rather than just an intepretation of it through people’s words. The enhanced camera could get more people shooting media, which could make Twitter more accessible to new users daunted by walls of text. More visual content also makes it easier to slip more visual ads into the feed.

Twitter tells me it’s not giving tweets created with the camera an algorithmic boost in the main timeline. But a spokesperson told me its combined human and technology curation team may seek to spotlight Twitter Camera tweets in the Whats Happening section about live events in the Explore tab. We’ll see if media organizations and brands try to take advantage of the new camera to stand out in the feed.

When you swipe left on the timeline, you’ll see a Snapchat style camera shutter button that records photos with a tap, and looping videos up to two minutes long if you hold. A mini-swipe over and you can record video or audio-only live broadcasts without any Periscope branding (will that app just become Twitter Live?). Twitter will then recommend hashtags based on big nearby events and other signals, or you can add your own as well as a location and text. You can choose between six colors for the TV news-style chyron those tags on overlayed on that help Twitter route the content into the imagery carousels for its different What’s Happening sections. 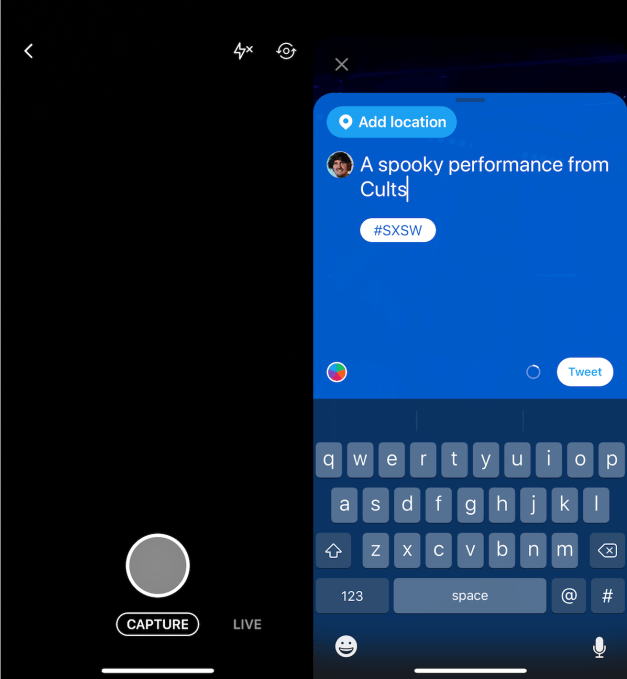 For now, there are no stickers, filters, light enhancements, or other creative tools in the Twitter camera the way there is in the image uploader in the tweet composer (which conveniently also hosts a shortcut to the new camera). Twitter tells me it wants to focus on tags that will pipe content into the right conversations instead of beautifying the media. That’s a different tack than YouTube, which just started rolling out augmented reality face filters.

Historically, Twitter has been extremely slow to launch product changes for fear of disturbing its long-time loyalists. But Twitter tells me its turning over a new leaf and pushing the new camera out the door even with rough edges so it can start getting feedback and iterating. That’s much closer to how Facebook builds than the Twitter we’re used to. The move aligns with the recent release of Twitter’s beta prototype app twttr that launched this week. Twitter seems to finally understand that waiting to perfect each feature and being scared to experiment has left Twitter behind its rivals.

People who love Twitter can’t find the same hellscape of constant conversation anywhere else, and the new camera probably won’t change that. But shifting towards visual communication without debasing itself to chase the Stories trend could make Twitter more comfortable for a world that increasingly talks through images.