Back in August, we knew Reigns: Game of Thrones would be coming to Android in October, and it would appear the developer has stayed true to its  word. As of this morning, the latest entry in the swipe ‘em up series is available for purchase on the Google Play Store. You can expect to find all of your favorite characters from the hit TV show as you play out hundreds of potential storylines through the familiar card-based swiping gameplay of the Reigns series, all in your quest to secure your claim to the Iron Throne.

As you would expect of any game themed around Game of Thrones, death will come often. But don’t despair, that’s just part of the gameplay. Whether you play as Cersei Lannister, Jon Snow, Daenerys Targaryen, Tyrion Lannister, or Sansa Stark, each will have to contend with the many fates of a person that sits upon the Iron Throne, and you better believe these storylines can easily end it death at any moment.

Just like the last two games in the series, the art is very minimal, but it’s definitely fitting to the fantasy theme, and you can easily tell each character apart. Now, as far as the storyline goes, there’s plenty of replayability to be found. This entry is the biggest and deepest in the series yet. Events may not exactly follow along with what has unfolded in the books or TV show, but that’s all part of the fun. Creating your own timeline where Sansa Stark marries Jaime, or you rebuild the Great Sept of Baelor as Cersei, is really neat. Between the numerous playable characters and the plentiful choices divvied out to you, no two playthroughs are ever alike. 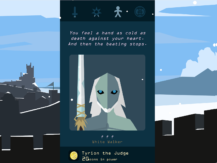 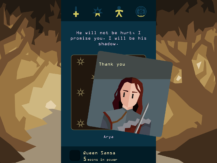 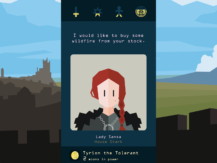 You can pick up Reigns: Game of Thrones for the low price of $3.99, and there are no advertisements or in-app purchases to be found. That pricing is the same whether you purchase the game on Steam, the App Store, or Google Play, so rest assured, our version is just as good as the rest. If you are a fan of anything to do with Game of Thrones, or simply enjoy the swipe-based gameplay of the Reigns series, this release is definitely a must-have.